2015 just came to an end, and Athena West 9.0 wrapped up the year with another great event.  We saw another batch of great ideas from innovators poised to make impacts in the coming year and beyond.

This time we changed things up by kicking the event off with a keynote talk from a Department of the Navy Innovation Hatch winning entry SPIDER 3D presented by Michael Russalesi.  Another first for Athena West was the use of a “shark panel,” providing a unique diversity of perspectives for Athena.  NAVFAC Southwest Commanding Officer CAPT John Adametz joined Prospective Commanding Officer CO of LCS 203 CDR Doug Meagher, and Principal Software Engineer at Fuse Integration Mr. Dell Kronewitter to question, comment, and spark discussion among the innovator-voters in the audience and the great line-up of presenters!

Without further ado, our winner is:

“Mobile Application for Command Sponsorship” – IT1 Ronald Coleman, COMLCSRON ONE

In today’s world almost everyone has a smartphone, why not take advantage of that to ensure our sailors can get the best support? An idea embracing current technologies and the realities of modern living, IT1 Coleman set out to solve the problem of connecting prospective sailors with their future commands.  From IT1 Coleman, “In my experience sponsorship programs within the Navy are inconsistent.  Many individuals seem to have a sense of burden when trying to contact new Sailors and vice versa.   My solution to that “problem” is the development of the In-Hand Sponsor Mobile Application.”  IT1 Coleman has created an application for mobile technologies (ios, android, blackberry, etc.) for our DoD personnel to connect with their prospective command and give them a concise source for the information they need, what the command mission is, who the chain of command consist of, what department to report to, who they should contact, and any other other useful information needed to guide the New Check-in to their new command on time.

IT1 Coleman displaying his winning idea.

Having checked into a few commands myself,  I can’t wait to see this one go live. 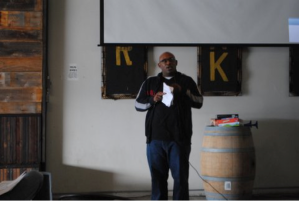 FCC McKinley Fitzpatrick talking about how to help ensure the fleet is always ready.

Looking at the challenges presented to sailors during a 24 hour duty day, FCC Fitzpatrick saw an opportunity.  Using an idea he not only saw tested but work effectively, he developed a shift work program to eliminate the 24 hour duty day.  From FCC Fitzpatrick, “The idea is to incorporate (3) eight hour overlapping shifts onboard ships to eliminate the need for 24 hour duty by utilizing the proven concept of duty section manning to meet all workforce/training needs. There are two concepts; Legacy concept (CVN, LHA/LHD, LPD/LSD, CG, DDG) & LCS concept (Minimal Manning).”  His idea maximizes crew readiness by limiting the length of the the work day to ensure a rested and aware crew while at the same time keeping the working 24 hours a day.  He acknowledged the difference between hull types and the challenges of implementing the system but he believes if this is fully embraced the Navy would see an improvement in readiness and quality of life.

While working to increase readiness in the OPSEC and Safety programs for the Littoral Combat Ship Squadron ONE, LT Sando stumbled on to the idea that tremendous efficiencies can be had with very simple changes to the implementation of those programs.  By moving program managers designations to the staff, LT Sando saw a reduction of 74% of the administrative burden for the individual units under his cognizance.  Talking about the fleet as whole LT Sando stated, “PACOM stands to benefit should it direct CNSP as a subordinate unit to ensure all Destroyer Squadron (DESRON) Staffs under their cognizance adopt a ‘vertically integrated’ program management construct in relation to their Afloat Safety and OPSEC programs.”   This simple modification implemented at LCSRON ONE resulted in a swing from 0 of 6 to 8 of 8 crews earning the Yellow “E” for Battle Efficiency.   LT Sando’s idea’s simplicity and proven results made it one of the top contenders for the ADM Simms award and idea with truly huge implications.

LCDR Hartley making his plea for better use of engineering data.

LCDR Hartley experience as chief engineer officer and as an ATG assessor has led him to believe their is a better way to use the data collected by smart ships to save time and money in ship repairs.  He presented an idea for an automated logging system to bridge the gap between Smart ship engineering systems and the needs to evaluate the trends in operating parameters to save money and time in repairs. His vision is of a web based application that takes the base data, places it in a standard US Navy log format, is reviewable by the required watch standers and applicable Chain Of Command, and automatically performs some of the functions that a watch stander would need to take. The system would be accessible from both shore base and sea based units, have automated data sorting routines, and be able to run while not connected to its shore based server.  Ship and civilian counterparts would be able to communicate real-time to analyze and review data, and digitally sign the individual logs. This system would incorporate the equipment operating logs, the ships bell logs, and the Engineering log.

Landing Signal Officers (LSOs) are the backbone of tailhook naval aviation. Currently, once a junior officer is selected from a squadron to become an LSO, that person typically will go through an entire workup cycle before going to the Initial Formal Ground Training (IFGT) course. This means that an LSO will undergo months of on-the-job training at sea and assume different roles needed to recover aircraft before that individual receives his/her first formal training during IFGT. At the center of IFGT is the LSO Trainer, Device 2H111, in which the LSO receives a series of six one-hour long sessions. For many LSOs, this will be the only interaction will be this training simulator.  The aim of his project was to develop and evaluate whether major training objectives for the 2H111 could be supported by other means. The result of LT Greunke’s study is a light-weight, portable VR trainer with a VR HMD as its display solution.  Using off-the-shelf technology, LT Greunke created a proof of concept, that has the potential to not only replace Device 2H111, but provide LSO’s the ability to train anywhere at any time, providing a more distributed, cost-effective, and more capable trainer.

It was great seeing many new faces and returnees to the event.  Thank you again to 32 North Brewing Company for hosting, to our Sharks, and to everyone that attended.  It’s was awesome to see the diversity of backgrounds at the event and watch the networking at work.  The driver of Athena is not just the ideas but getting those like minded individuals in the same room talking and Athena West 9.0 continued that tradition.

We look forward to serving the Fleet to continue the US Military with it long running tradition of innovation!

LCDR Mark Blaszczyk is the Combat Systems Training Lead in Commander Littoral Combats Ship Squadron One and the co-lead for The Athena Project’s San Diego chapter.  He is a graduate of Purdue University with a BS in Civil Engineering and Duke University with a Masters in Business Administration.

There are loads of Athena Events coming up! If you’re in the San Diego, Groton or Yokosuka areas, connect with us if you want to be a part of our upcoming events! Connect with us on Facebook: www.facebook.com/athenanavy or follow us on Twitter: @AthenaNavy. Interested in starting a movement of your own? Message us, or e-mail athenanavy@gmail.com! 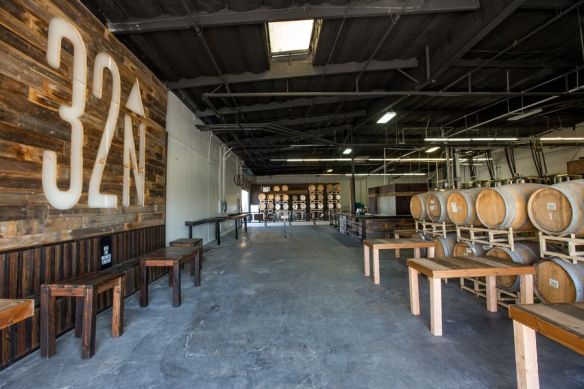 For this event, we’ve made it easy for you to let us know you’re coming, thanks to Eventbrite. You can RSVP here.

As the first Waterfront event in San Diego since the departure of USS BENFOLD, I am excited to be taking the reins from LTJG Tom Baker and the crew of the BENFOLD and I couldn’t think of a better home than LCSRON ONE for the Athena Project.

As commands go, few spend more time trying to innovate than LCSRON ONE, as we work to develop and establish the revolutionary changes the Littoral Combat Ships represents for the Navy.

But just because LCSRON ONE is focused in the LCS community, it doesn’t mean that Athena West 9.0 won’t be showcasing ideas from across the various communities of the Navy and beyond!

As Athena continues to expand its reach throughout the nation and soon internationally, it is an exciting time here in San Diego as we look to draw on more and more ideas from a more and more diverse community. Athena West 9.0 expects to deliver a diverse group of ideas.

We are always thrilled to connect with anyone who might be inspired by the Project and would like to get involved – message us if you’re interested!

As always, the stage is 100% open to any innovators in the San Diego area, regardless of community or service affiliation, and we still have a couple presenter spots open! So, If you have a big idea that you want to share with our open and accepting network, get a hold of us and come on down to the event to share your idea with kindred spirits!

We’re looking forward to an awesome event, and hope to see the Navy innovation community out in San Diego in two weeks!

LCDR Mark Blaszczyk is the Combat Systems Training Lead in Commander Littoral Combats Ship Squadron One and the co-lead for The Athena Project’s San Diego chapter.  He is a graduate of Purdue University with a BS in Civil Engineering and Duke University with a Masters in Business Administration.

Get ready, Japan, Mayport and Groton! Athena events are coming your way soon! Want to know more – hit us up!